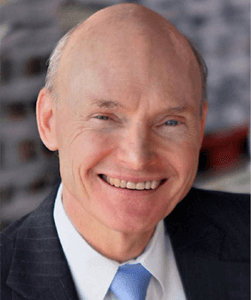 Walter Hussman was born in Texarkana, Texas but moved to Camden, Arkansas in 1949 and has been involved in the newspaper business in Arkansas for all of his adult life.  He earned his bachelor’s degree of journalism from the University of North Carolina and his master’s degree in business administration from Columbia University. In 1970, Hussman worked as a reporter for Forbes magazine. He returned to Camden to become the general manager of The Camden News. In 1973, he moved to Hot Springs accepting the job of vice president and general manager of Palmer Newspapers, which is a division of WEHCO Media.

WEHCO Media purchased the Arkansas Democrat newspaper in 1974 and Hussman moved from Hot Springs to Little Rock to manage the new acquisition. As circulation for the Democrat newspaper dwindled, Hussman reached out to The Gazette publisher Hugh Patterson request a merger of the two papers. When Patterson refused, Hussman vowed to bring back The Democrat. He did this in the late 70’s by offering free want ads, switching to a morning distribution and bringing on new talent. By 1980 The Democrat was noted as the fastest growing newspaper in the United States.

By 1986, under Hussman’s management, The Democrat led The Gazette in Sunday distribution and was tied with them in daily circulation. In 1991, WEHCO purchased The Gazette and did what Hussman had proposed two decades prior. They combined the two papers into a new publication named the Arkansas Democrat-Gazette which Hussman still helms.

In 2007, Hussman penned an article “How to Sink a Newspaper” for the Wall Street Journal urging newspapers to stop providing free content online. He warned that the online posting of newspapers would become a “self-inflicted wound.”

Hussman is known nationwide for his David vs Goliath newspaper merger and his innovative strategy of offering free want ads to increase newspaper circulation.

Up In Your Business is a Radio Show by FlagandBanner.com