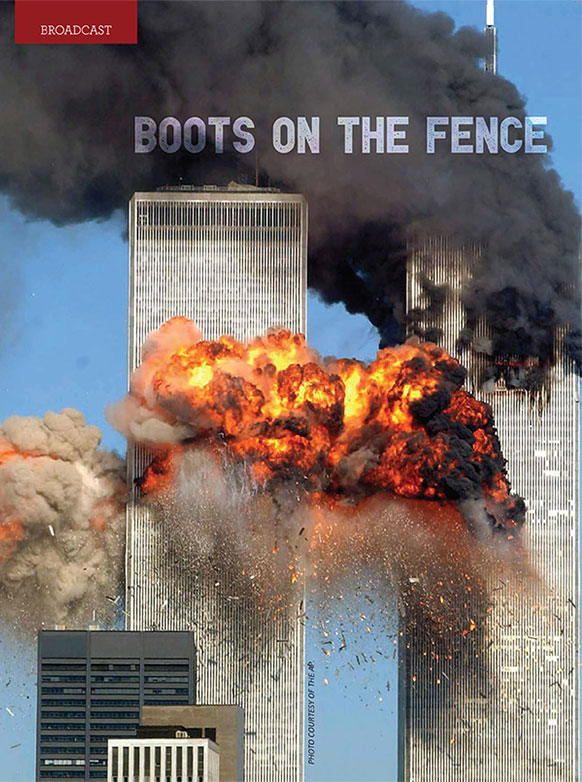 Boots on the Fence

midst the rubble and debris of the 9-11 attacks on the World Trade Center, St. Paul’s Episcopal Chapel stood untouched. The following is an excerpt of an interview from Up In Your Business with Kerry McCoy with Rev. Dr. Stuart Hoke, a priest that was there that day. This is his first-hand eye witness account of the day and of those that took shelter in the church.

After 29 years in parish ministry, I got the education bug and thought I would really like to go back to school. So at 49, I got a master’s degree just to try it out, see if I could do it. Then, spent the next four years working on a PhD. Finally, at age 55, I was awarded a doctoral degree. Simultaneously, I got a job at Trinity Church Wall Street, which is probably the biggest Episcopal Church in North America. I was there for a year and I lived on the Upper West Side of Manhattan, took
the subway to my office every day. The office was about 75 yards from the North Tower.

On September 11, 2001, I was on the subway when the first plane hit and the subway conductor said, “We are approaching Chamber Street,” where I’d need to get off and get on the other side to take the local train to get to Wall Street. Then he said, “Stay on the train. There has been an incident at the South Tower.” Then he screamed, “Stay on the train.” All of us stayed on the train. We had no idea of what was going on. I got off at Rector Street near Wall Street, and came up out of the subway tunnel. It was a beautiful day when I’d gotten on the train and it was very cloudy when I got off. There was debris in the air, there were women’s clothes coming down from the sky and people were screaming.

About that time (it was two minutes ’til 9:00) another plane from the west came from out of the blue. It was right over our heads, a thousand feet above us. It hit the tower at an angle right where we were standing and debris began coming down. The woman next to me had the most incredible question. She said, “Is this a setting for a movie?” I thought immediately–Bruce Willis. I thought, “Well, of course this is one of his disaster movies.” I said, “Yes,” and we just stood there. Until another friend came up to me, shook me literally by the scruff of my neck and said, “Stuart, run for your life.” It dawned on me I was in trouble and I ran for my life. Many didn’t. All of that debris from the impact of the plane and what came down–the jet fuel and the debris–some of it covered some of the people with whom I was standing.I ran into the basement of the American Stock Exchange. The church office was right next door, Trinity Wall Street. Trinity has been there since 1689, so it’s been a fixture on Wall Street. I ran in there and the rector said to me, “People are streaming down Broadway and they’re looking for shelter and they’re running into the church. Go over there and do something immediately.” He spotted the organist and he said to the organist, “Go with Stuart.”

We went over and we did a spontaneous impromptu service of scripture readings and hymns and prayers, mostly as crowd control. You could hardly call it worship and yet, it was that too.

Some really amazing things happened in that 45-minute segment between us getting there and the fall of the first tower. We had 45 really good minutes there to sing and to pray and to read pieces of scripture, like the 23rd Psalm. I read the 23rd Psalm: “The Lord is my shepherd. I shall not want.”
There was a man of the congregation who did something I’ve never had done in all my years of ministry. He jumped up and said, “Do that again.” He loved that portion of, “Yea, though you walk through the valley of the shadow of death.” 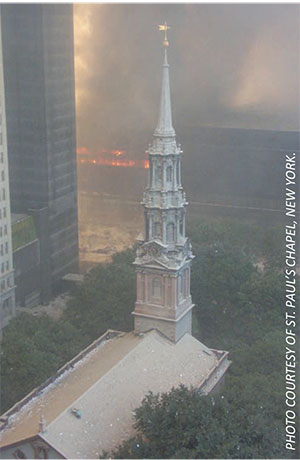 I did make a huge faux pas at one point. I said, “The next hymn we’re going to sing will be ‘Nearer my God to Thee.’” Well, this man said, “No, not that one.” If you’re old enough, you remember that the movie, Titanic, as the ship was going down, the little brass band was playing ‘Nearer my God to Thee.’ A bunch of the people in the congregation remembered that. Amidst all of this cacophony and craziness and sirens and the darkening of the church, people laughed occasionally. It reminded me of something about humor and humanity and humility. We were really depending on God’s grace. The humor was part of it. I think about that a lot. That was such a gift at that moment.

When the first tower fell, the windows fell out of Trinity, the lights went off, some of the people got under the pews. It was a moment of horror. There was a woman in the front row who was screaming at the top of her lungs, “Jesus, Jesus.” There was someone at the back of the church going, “Anthrax, Anthrax.” It was my job to try to settle things down and to keep right on going, be faithful to what was at hand.

Then a policeman came in and he said, “You all need to get out of here quickly. If that second building falls, it may fall right on the top of Trinity. There are boats of all shapes, models and kinds down on the harbor waiting to evacuate the island, so get down there as fast as you can.” And people fled. Over a 100, maybe 200,000 people were evacuated that day off of Manhattan. I ran back into the office building before I went to the boat. We had a day school at the time, and it was early in the morning. We had 150 children, only 90 had been there, had gotten there that day. If the terrorists had come just a little bit later, so many more parents would have been in the World Trade Center.

Anyway, it was a cold day. It was the first cold day of the year. Staff members wrapped the little tiny babies and children up in their coats, and at a given signal, we ran down the street toward the Staten Island Ferry. The second building fell at that particular moment. You’ve seen pictures probably of the dust ball that comes down the street. Well, it engulfed us. It was clocked at 240 miles an hour, and it knocked everybody all over the place.

We could hear babies crying and someone said, “Am I dead? Am I dead?” We picked ourselves up, got our bearings, and followed a wonderful young business manager at the church to the Staten Island Ferry.

There were boats of all kinds leading people to one place or another. The fascinating thing is two city buses came down the sidewalk. You have to imagine all the streets were gridlocked. People had jumped out of their cars, even leaving the cars running. They were everywhere, but these two city buses came down the sidewalk, stopped where we were, and a driver said, “We can take your children and your day school teachers to shelter. We know a route up the FDR freeway. We will take them to St. Roses’ in the Bronx and there they’ll be safe. Use your walkie-talkies, use your cellphones while they’ll still last. Leave a message, so that when parents call you can say that your children are located hither and thither.”

By ten-o’clock that night, every single child had been reunited with every single parent. Well, that was amazing, because 80% of our parents in that school were World Trade Center parents. They had either not gotten to work, or they were not in harm’s way when disaster hit.

At St. Paul’s that night, on the 11th, the policemen and women, firemen and women, rescue workers came in and took over that church. They put a port-a-potties out front. Parishioners came, illegally set up BBQ pits and began serving these guys and these women hot dogs and hamburgers. Within 24 hours, it had become a respite center and it continued for the next 11 months.

St. Paul’s Chapel had 40,000 visitors a week for almost a year, because it was the only place to grieve. The city didn’t provide a place to mourn. The church was a safe place. People knew that they could cry there and no one would try to take that away from them.