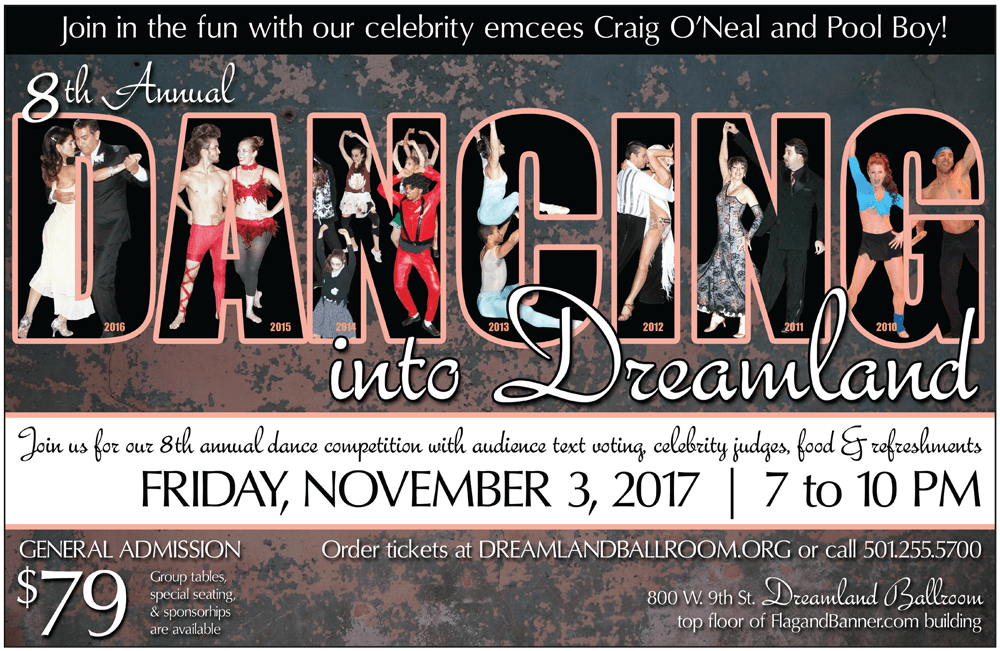 Dancing Into Their 8th Year

The eighth annual Dancing into Dreamland dance competition and fundraiser hosted by celebrity emcees Craig O’Neal and Pool Boy will take place on November 3, 2017 in historic Taborian Hall’s Dreamland Ballroom. The annual event generates revenue for improvements and educational programs focused on the history of the building and its significance to the Little Rock African American community.

The current fundraising effort is to make Taborian Hall accessible to all by installing an elevator which would be ADA (Americans with Disabilities Act) compliant. The non-profit group, The Friends of Dreamland, needs more than $700,000 to achieve their goal. The group is also raising funds to frame and preserve paintings donated by the family of the late Arkansas artist, Edwin Brewer.

This year’s fundraiser will begin at 7 pm and last until 10 pm. Celebrity judges will choose the winner of the dance competition while audience members text in their vote for their favorite dancers to receive the People’s Choice Award.

Recently, the Dreamland Ballroom and Taborian Hall were featured in an AETN documentary film entitled “Dream Land: Little Rock’s Ninth Street” which premiered in April of this year and in September won a regional Emmy Award for editing.

The Friends of Dreamland invite the public to attend; general admission tickets are $79. Entire tables beside the dance floor are available. Order tickets online at www.dreamlandballroom.org.