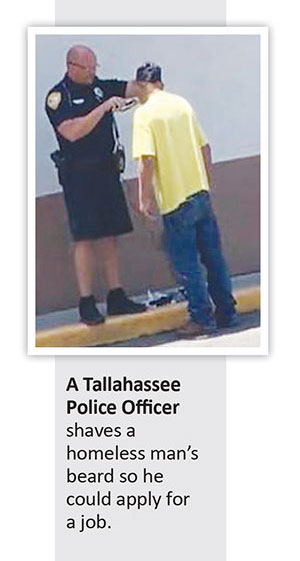 read three news stories today about the police in various cities helping people. We so often hear stories of conflict involving Law Enforcement officers that it was nice to be reminded the majority of cops really do serve and protect.

In the first story, a woman named Kelly Duvall snapped a picture of a policeman behind a Circle K in Florida helping a homeless man shave, so he could apply for a job. The Tallahassee Police Department posted it on Facebook and the story has since gone viral.

The second story was about an Alabama man who walked 20 miles to make it on time to his first day of work. During the twelve-hour trek, he stopped to rest around 4 a.m. A policeman pulled over to ask if he was okay. When the man told the cop that he was heading to work, the policeman asked how long it had been since he had eaten. When the man answered he hadn’t eaten since the previous day, the officer told him to get in the car and took him to a Whataburger and treated him to a meal. The officer was nearing the end of his shift but sent another policeman to pick up the man and deliver him to his job site. When the owner of the company learned of the determination of his new hire, he gave him a car!

The last report relayed the tale of the Indianapolis Metropolitan Police Department responding to a veteran that had lost her service dog. She had stopped at a gas station and three men jumped into the car and drove it away. Her dog was in the back seat. When the car was discovered, there was no dog. The Department issued a city-wide call for help that was posted on Facebook and sightings of the dog were soon reported. There is a video showing the dog bounding toward his owner where one of those sightings took place.

We are bombarded by news about the abuses of police officers against the public. Those actions get a lot of air time, are replayed and should not be swept under the rug. But, like anything that is continuously repeated, we tend to stereotype and overgeneralize the behavior. Long ago, Michael Jackson sang, “One bad apple don’t spoil the whole bunch, girl!” It would prove wise to accept that as a reality instead of a jingle.

Facts prove most of our police officers are doing a great job. I certainly wouldn’t want to live in a country without them.