Fun with Flags
Know Your History, Know Your Neighbors 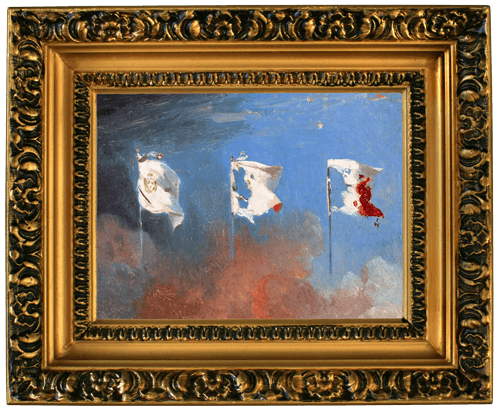 n July of 1830, Paris, France, citizens rose up, and in a mere three days, overthrew their government. The events leading up to that revolution included the government delaying upcoming elections, eliminating the rights of the middle class to run for office, dissolving the national guard and suspending the liberty of the press.

As unemployment spiked, the people united. Angry emotions flared, and with nothing to do but protest, they took to the streets and in three days overthrew the government and created a constitutional monarchy.

This beautiful painting by Leon Congniet, titled Scenes of July 1830, shows three flags, torn and bloody, but still flying - perhaps a tribute to those three days, when the people stood together and created a new future.

The coat of arms is in the center of the flag, showing an eagle eating a rattlesnake perched on the prickly pear (their state flower) cactus. Underneath is a garland. On the left, the garland is green oak, a symbol of strength. The right has a laurel branch, symbolizing victory.