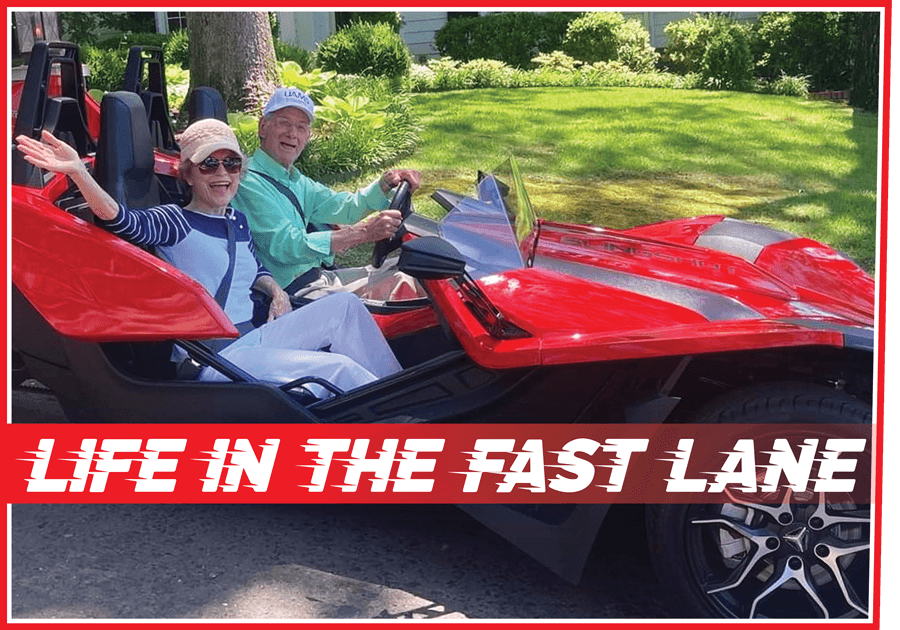 Life in the Fast Lane

n 1958, I was working at the Arkansas Industrial Development Commission at the State Capitol. A co-worker asked if I would go on a blind date with

her date’s friend. I said “Oh, no I don’t think I want to.” She replied, “Oh Ann, come on, they are nice guys, both are Lieutenants in the Air Force. They make plenty of money and don’t mind spending it!” Well, when I went home and told my parents, my father said, “Sister, you don’t want to date an Air Force man. They are here today and gone tomorrow!” Dad never had a very high opinion of anyone I wanted to date. He warned me not to date med students because “they work hard and play hard!” Well, I had a few dates with med-students and had a good time, so I ignored my father’s warning and accepted the date.

My co-worker’s date, Grady McCoy, and his friend picked me up first. I didn’t want to feel like I was being chauffeured, so I sat in the front seat between the two men on the way to pick up my friend. Grady and I instantly liked each other. He even tried to sit beside me at the movie, but his date asked him to change seats with her to position herself in between us! We all got something to eat after dinner and went home. I didn’t think much more about it. In the following weeks, I had other dates. A month later, Grady called and asked me out for a dinner date. He came by, met Mother and Dad, and took me to the best steakhouse in town. We had a delicious dinner, lots of conversation and danced. He was a very good dancer.

We had a few more dates before I left to spend the summer in Long Beach, California with my aunt and uncle. Grady and I wrote letters back and forth. When he would receive one of my letters, he would call my mother and father and let them know all the news. They began inviting him over for Sunday brunch and, over the course of the summer, they all became great friends. When I returned from California, Grady and I had a few dates before he left for the Air Force base in Sacramento. Because phone calls were too expensive, we wrote lots of letters. For Christmas, Grady sent me a beautiful soft-yellow cashmere full length coat and when he saw it, my father said, “Now, Sister, this young man is serious. You cannot lead him on.”

In February, Grady drove across the country from Sacramento to his home in South Carolina. He stopped in Little Rock for a few days, and before he continued his journey, he asked me to marry him! Of course, I said yes. He invited me to come home with him to meet his family. We drove the 1100 miles non-stop. On the way, I guess I began to wonder what I had gotten myself into. I asked him not to tell his parents that we were engaged. “Let’s just have a visit,” I said. He complied, but firmly stated, “You are going to marry me.”

I stayed in South Carolina about three days and met many of his family. To my great relief, we all liked each other. I flew home to go back to work. When Grady came back through Little Rock on the way to his new assignment, Altus, Oklahoma Air Force Base, he only stayed a couple of days. He called his mother to tell her we were engaged, and she exclaimed, “Oh son, I’m so happy you brought her home to meet your family before asking her to marry you.” (We were off to a good start!)

Grady left for Altus, Oklahoma and I didn’t see him again until he returned on April 24th for our rehearsal dinner and wedding the next day. We stayed two days in Hot Springs and returned to Altus where we lived for the next year.

Grady’s next assignment was to Wright Patterson Air Force Base in Dayton, Ohio where we lived for three years. We were the youngest couple at a very large Air Force Base. There were lots of parties, dances, dinners, swimming pools, golf, tennis….it was great. We had an apartment and then rented a house. Our first child was born at the Wright-Patterson Base Hospital. In those days, it was protocol that after having a baby, the new mother would stay in the hospital for five days. Believe it or not, the bill was $7.50! Grady served for seven years as the radar navigator on a B52 Radar/Bombardier. He kept them on course and guided them in flight to rendezvous in the air with a KC135 to refuel (twice in 24 hours) and, if ever necessary, his job was to drop the bomb. After seven years, he was promoted to Captain.

Grady resigned to accept a position with International Shoe Company that took us to Memphis, Tennessee for five years. We left Memphis for Little Rock where he joined Rector Phillips Morse Real Estate and had a 34-year career as a real estate agent. 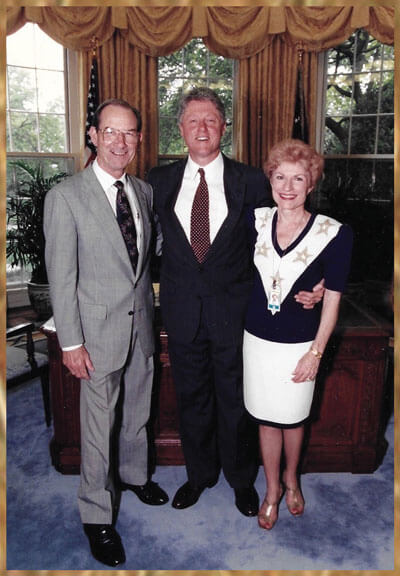 The first 14 years we were married, I stayed home with our three children. In 1973, I accepted a receptionist position with then, Lt. Governor Bob Riley, who was married to my cousin. I loved it and got to know everyone in the State Capitol. Two years later, I went to work selling real estate. In 1983, our daughter became a nanny for Chelsea Clinton. I volunteered to give tours of the Governor’s Mansion. Then, our youngest child lost his battle with cancer. He passed away on Christmas Day in my arms.

The Clintons reached out to me and offered me a position as Administrator of the Governor's Mansion. It was a life saver really. I was so busy with my duties there, I was unable to succumb to the grief of losing a child. Then, when President Clinton was elected, he asked me to go to Washington as the Social Secretary and appointed Grady to a position in the Department of Housing and Urban Development.

I wouldn't give up that experience for anything, but I don’t think I could ever summon the energy to do it again. Eight years of operating on adrenaline was enough. I had the opportunity to meet a lot of high-profile people. I believe we had over 1,100 guests spend the night in the White House in the eight years that Bill was President. I knew those guests had money and fame, but I never felt they were above me. I think those people need people who are comfortable with them because they have too many people who worship them. There are so many interesting and impressive people in the world, but when they would come to the White House, the majority of them were in an area that they were not the star and they were humbled by being there.

After Bill left office, Grady and I returned to Little Rock and have spent the last few years enjoying our friends and family.

The first year that Grady and I dated, we really only saw each other about a total of thirty days; so we have spent 61 years getting to know each other…. And it has be a great ride!