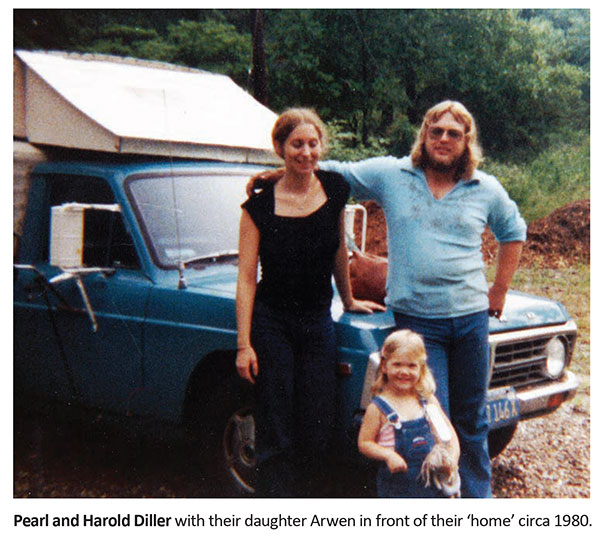 t the end of The Wizard of Oz, Dorothy states, “If I ever go looking for my heart’s desire again, I won’t look any further than my own back yard. Because if it isn’t there, I never really lost it to begin with.”

When I began to conceptualize this edition of Brave, I wanted to tell the stories of those that work beneath the shadow of the flag. When I started searching for stories, I realized, like Dorothy, that I needn’t go further than my own back yard. I began asking a few of my co-workers around FlagandBanner.com if they would let me share their story.

At first, there was some resistance. No one really wants to tell all. I knew that Arwen Dover, our resident genius in charge of website content, had a great story. But when I asked, she emphatically refused me. A couple of days later, she sheepishly poked her head in my office. In her hands was a baby book. “I thought about it, and I think it will be okay if you still want to write about me. Here’s some stuff to get you started,” she said. She handed me the baby book and quickly exited.

“Wow,” I thought to myself. “How am I going to do this justice?” Arwen’s story is one of homelessness, a subject matter with which I have no experience. I opened the baby book and began to flip through.

This is the story that unfurled before me.

It was the year of America’s bicentennial when 19-year-old Pearl Olson and 22-year-old Harold Diller tied the knot. They were young, free-spirits whose values were shaped by the decade in which they grew up–the ’60s. Life extended its invitation to explore and the Diller’s answered with a resounding “Yes!”

Unbound by responsibility, they packed their little pickup truck with the camper on back and hit the road…off to see America. It was a great set up. They had a vehicle to travel wherever they wanted to go and a bedroom on the back when they needed to sleep. Turtles had nothing on them!! 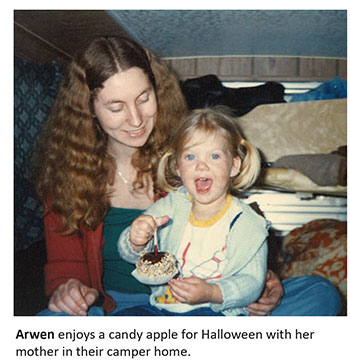 They had everything they needed. (Because, per the Beatles, “All you need is love.”) Life was wonderful for the gypsy newlyweds.

A year later the newspaper headline read, ‘Elvis is Dead’ and Pearl and Harold became parents. They named their new daughter Arwen Evenstar from the Lord of the Rings trilogy. ‘AR’ meaning noble and ‘WEN’ meaning woman. The young couple’s unconventional idealism seemed to solidify in her name.

They were a family and they were happy. They never entertained the idea that their lifestyle should change. They simply took Arwen along for the ride. After all, babies are so small, you can take them anywhere. She certainly didn’t take up much space in their tiny camper on the back of the pickup truck…at first. As all parents learn, babies don’t stay babies very long. As Arwen grew, they moved around a lot. By the time Arwen was ready to begin school, they had lived in 17 different places.

Pearl chronicles all of this in Arwen’s baby book. They are all listed on a page titled “Baby’s First Address.” The third address on this page simply notes ‘Colorado.’ The fourth address is just a number 4, as is the 10th and the 14th.

There are multiple campgrounds listed as home and a couple of trailer parks. But there are no dates and being under school age, Arwen has little recall of any of them or how long they stayed at those places. She does remember having a dog or two, but only because she is standing next to one in a picture.

Being in school did serve to stabilize the family for the months it was in session. But as soon as the school year ended, they were off again. They were in a duplex in Massillon, Ohio for first grade, then Fort Lauderdale, Miami and Orlando, Florida in Arwen’s 4th grade year. They stayed with one of Harold’s friends for about six months, then moved back to Shelby, Ohio for 5th through 12th grade. Although they didn’t change cities during this time, they did change locations several times. No actual addresses are noted. Arwen does recall the fear of having to lie about her address to stay in the school she was attending.

The baby book is filled with records of height and weight. Each year Pearl outlined Arwen’s little hand. Each birthday and Christmas recorded. Even Arwen’s first prayer is documented.

On Arwen’s third birthday, Pearl writes: “Arwen, you spent this birthday at the N.E. KOA Campground in Houston, Texas. The school teacher next to us, John, and the couple living in the bus, Mike and Dawn, came over to share cake with us and Uncle George.”

Her fourth Christmas was logged as follows: “Nothing special happened this year Arwen. We went out to eat breakfast on Christmas morning and had Christmas dinner at a friends but spent the rest of the day in Pizza Hut’s parking lot in Addicks, Houston, Texas. We did not have the money to exchange gifts.”

I’m struck by the handwritten entries that detail Arwen’s childhood. They are the loving diary of a doting mother that is charting all of her child’s firsts. She writes in this baby book speaking directly to Arwen. It is touching. It is angering.

I realize it is not mine to judge. This story belongs to Arwen. It is her childhood that she chose to share with me. With you.

It was she that said, “I didn’t realize until I was grown up that I had been homeless.” I don’t know what to make of that. I want it to have had some profound negative effect on her and I don’t know why. But it hasn’t. Arwen is good as gold. Well adjusted. A wonderful parent. Tremendous work ethic. I read a quote by Barbara Bloom that said “When the Japanese mend broken objects, they aggrandize the damage by filling the cracks with gold. They believe that when something’s suffered damage and has a history it becomes more beautiful.”