Placemaking in the Bag

Volume 6 Issue 2 Fall-Winter 2019
The following article is a compilation of excerpts from an interview with Anita Davis on Up In Your Business with Kerry McCoy, FlagandBanner.com’s radio show, transcribed by Madison Monroe .

was born in 1946 and grew up in Murfreesboro, Arkansas. By the time I was twelve, it was the 50s. We had three pharmacies and three grocery stores in the town. By the 60s, a Dairy Queen, a Five-and-Dime and an auto dealership had joined them. You could walk everywhere. My mother was quite a fashionista and loved to shop. I was an only child and inevitably got dragged along after her. I was getting a little training in what neighborhoods could be. After college, I moved to Nashville, Arkansas and opened a small store on Main Street there. Because of my store’s location, I attended a Main Street conference in Seattle, Washington. It was there I was introduced to the concept of ‘placemaking.’

Shortly after that, in 2004, my mother passed away. I bought the Bernice building on Main Street in Little Rock that year. It sort of spoke to me because my grandmother’s name was Bernice. After that, I purchased the property next to it and I built a public sustainable garden that I named Bernice Gardens. That’s placemaking, when you bring people together and also offer them things they need. Soon Edwards Food Giant opened, followed by USA Drug. South on Main (SOMA) started feeling like a neighborhood, like how I grew up.

In 2011, I bought the building that is now the Esse Purse Museum. The word Esse means ‘to be’ in Latin and a woman’s purse holds who she is, her essence. We show purses and what might have been in them, along with photographs of women holding their purses and a brief history of the time period. We show decade by decade, from the 1900s to the 2000s. 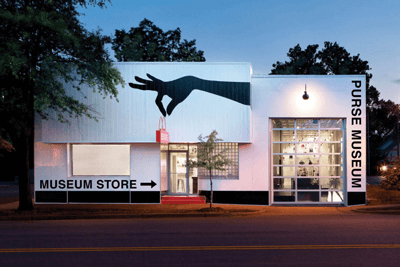 During the past decade, restaurants and breweries, bakeries and a magazine have opened up in SOMA. It’s interesting that if you identify your philosophy, other people will pair up with you. We want a walkable community, so we don’t have to rely on our car so much. We want to make it slow, so that people can walk without fear of being hit. When people walk, they are conscious of the litter and trash on the street. They begin using the trash receptacles and that keeps the garbage from going down the storm drains and ruining the fish creeks. Building a neighborhood builds a community.

Listen to the full interview