ddie met Sally in a Washington, D.C., boarding house in 1942, the eve of the United States’ decision to join yet another Great War. Both were young and far from home. Edwin O. Krouse, a Pennsylvania native, was studying to be a FBI agent, while Sara Lee Rhea of Batesville, Arkansas, had been recruited to be a typist. She was a tall, fiery-haired beauty with a square smile; and he, a gregarious, darkly handsome young man, found her breathtaking and mysterious. 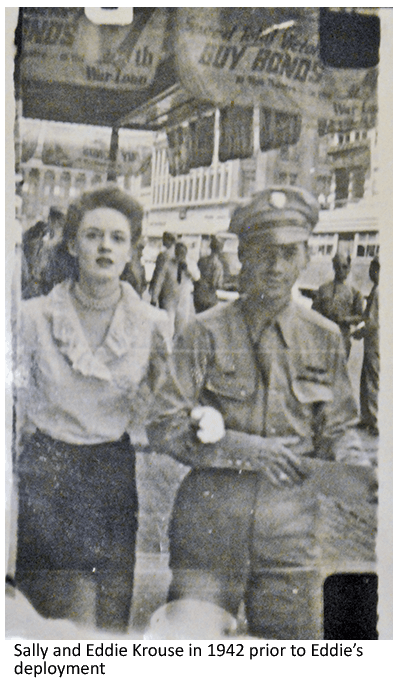 To hear them tell it, they met, fell in love, got married, raised three children and led a mundane life. No life is entirely uneventful, however, and their first years of marriage were far from it. As Paul Harvey would say, “Now for the rest of the story.”

Their love affair began when the pair spent a short time in our nation’s capital, where they talked all night on the boarding house rooftop terrace while watching the passersby below.

They attended music shows featuring Tommy Dorsey and a skinny kid named Frank Sinatra. They dined in restaurants and went on long walks. One rainy afternoon as the two strolled hand-in-hand, Eddie glimpsed his first magnolia tree. Beneath its blossoms, he gazed into Sally’s eyes and said, for the first time, “I love you.”

They married within a month, but their honeymoon was bittersweet. Eddie was drafted into the Air Force and was deployed to England a mere two weeks after their courthouse ceremony. While he ran air raids as a gunner and radio operator on B-17 Flying Fortresses, Sally returned to Batesville. She wrote her husband letters filled with whimsical humor and new-love hope, underscored with pleas of caution and twinges of dread. She closed each message with, “I love you…be careful.”

Her worst nightmare became a reality January 25, 1944, when she received a telegram from the war department informing her of Eddie’s disappearance. His plane, named Flak Happy, was shot down over enemy territory. An ocean away with no clue as to whether her husband was alive or dead, Sally did the only thing she could: write and write and write. Each letter returned unopened with the same harrowing news scrawled across the front – MIA.

Eddie was on his 24th raid and one mission away from going home when his fate soured. His lucky number five radio, on which he’d carved her name, “Sally,” was taken by another squadron. What’s more, the engine light on their bomber glowed a foreboding red. Not wanting to appear cowardly, the ten-man team voted unanimously to fly anyway.

Close to 300 planes began the mission that day, but all were called back soon after takeoff. All, that is, except the Flak Happy and 17 others too far ahead to get the radio transmitted message. While those 18 aircrafts fought the entire German Air Force, the unthinkable happened. The Flak Happy’s engine failed and the bomber dropped out of formation. The Germans immediately pursued the crippled aircraft, peppering it with missiles and gunfire.
The enemy found their mark when they struck the plane’s wing, damaging it so badly that the pilot called for an evacuation.

Eddie was the last to parachute from the spiraling wreck. With the plane in free fall, he lunged for the cable to open the door, only to find it frozen, trapping him inside the ravaged plane. His only escape was a window above the dangling wing, and though he feared he would be hit by the debris, to do nothing would be certain death. So he whispered, “Well, this is it Sally,” and jumped.

Miraculously, he missed the wing and parachuted to safety – or so he thought. He landed in a field and, avoiding angry civilians, 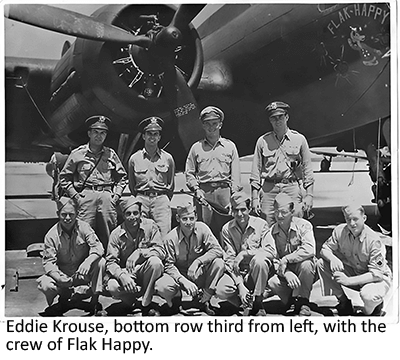 surrendered to the German forces. As the enemy marched him from his inopportune landing spot, he grimaced at the sight of one of his teammate’s bodies pitch-forked to a tree. The Germans took him to Stalag 17B in Austria, where he starved, froze and waited out the war.

On March 3, two months before her first wedding anniversary, Sally received another telegram from the war department. It read, “Report just received through the International Red Cross states that your husband Sergeant Edwin O. Krouse is a prisoner of war of the German government.”

Sally was flooded with relief that Eddie was alive, and then felt a wave of terror at the fate her beloved might find inside a POW camp. At least she finally had an address for her letters, which reported the young, torn couple’s milestones. She told him her birthday wishes, her insecurities about her worthiness as the wife of a hero, and her impatience at their separation. On their second anniversary, she told him how her friends had sent her flowers in his absence. She ended her letters with reassurance and love.

Eddie was allowed to send only one V-mail back to his worrying wife each month. Since the German’s censored their correspondence, the couple was forced to communicate in clumsy block letters. The paper was as thin as moths’ wings and allowed little more than a post card’s worth of space for them to express their feelings. Sally lived for those tiny scraps of parchment.

At the camp, Eddie was alive but growing thinner by the day. Rations were scant, and Red Cross care packages containing chocolate, cigarettes, powdered milk and other necessities rarely made it past the hungry guards. The prisoners inhabited a dark, cold world sustained by a single stove with little fuel. Toilet and washing facilities were equally insufficient. At night, he covered himself in two threadbare half-blankets and dreamed of Sally.

On April 8, 1945, after more than a year’s imprisonment, an emaciated Eddie staggered through the camp’s gates, but his ordeal was far 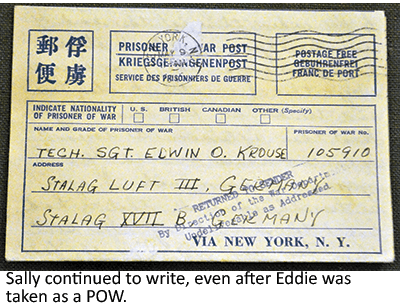 from over. The guards marched him and about 4,000 other prisoners east across Austria, hoping to surrender to the Allies rather than the dreaded Red Army.

They traveled 20 kilometers per day, sustained only by dwindling care packages, a measly drop of soup provided by the guards and

whatever they could trade or scavenge. After 18 days, they stopped in the woods near Braunau, Austria, and built hasty wooden shelters while they awaited rescue. They sat there until May 3, when the 13th Armored Division rumbled in, captured the guards and freed the prisoners. Eddie was finally on his way home.

On June 8, Sally received her final telegram from the War Department. It read: “The Secretary of War desires me to inform you that your husband T/Sgt Krouse, Edwin O. returned to military control 03 May 45.” They reunited in Saint Petersburg, Florida, by the end of June. The love that blossomed under the magnolia tree in Washington had grown stronger during their time apart, and they remained happily married for 55 years until Eddie’s death in 2004.

It’s true that Eddie and Sally met, married and raised a family, but their love story is far from mundane. In fact, it’s extraordinary.