This is her story, told to Kerry McCoy in an Up In Your Business radio show interview and transcribed by Madison Monroe.

The Words of Dr. Sybil Jordan Hampton:
My Background

'm the third generation of my family to go to college. My mother's father hitchhiked from the Bayou Bartholomew down to Mississippi, attended college and received a two-year degree. My father hitchhiked to Little Rock from Wilma, Arkansas, because there was not a Rosenwald School in Wilma. He wanted to go to college, but he did not have the required credits, so he lived as a servant in the heights and went to Dunbar High School, where he met my mother.

My grandfather lived with us, so my brother and I had the opportunity to grow up and hear adults talking about the things they had done. I would say just by living and breathing in that house with people who made great sacrifices to be educated shaped my brother and me. We knew that we were going to college, because everybody in the family had gone to college.

My father graduated from Philander. My mother went to Dunbar Junior College, but she wanted to go to Philander too. My father decided that as a woman, it wasn't really important.

That was so fascinating to me as a child, to understand that there were barriers for women. My mother succeeded in going back, but there was resistance from my father. Then she got a master’s from Fayetteville. She was among that group of African American teachers here in Little Rock who would go to special programs in Fayetteville during the summers, to earn master's degrees.

My father was a part of the Arkansas Human Relations Council. My parents were active with the NAACP, very active at Bethel. Of course, Bethel was the church that Ernie Green, Gloria Karlmark, Melba Pattillo attended, three of the Little Rock Nine.

The Times Of Early Desegregation

During the 40s and 50s, my father and mother were involved in conversations about what the community needed to do. My brother and I really felt that somebody's children had to do it. My parents felt that our family’s jobs would not be jeopardized like other families might be, because my father worked for the Post Office and my parents owned a grocery store on the corner of 7th and Park. So, when the Little Rock Nine began, I was already talking with my parents about whether my brother and I would go to Central.

Lots of young people volunteered, because you had to be screened. There was intellectual and psychological testing. The school board kept winnowing away the number of students that they would consider sending to the school. Between 1957 and 1971, the Little Rock School Board used the pupil placement law to select the African American students that went to Central and Hall High Schools.

The testing criteria had to do with grades and perceived strength. The psychological testing was designed to choose young people who would have the strength and presence of mind to be in a stressing and distressing situation. I think they were really looking for model students among the group.

The screening process went on for maybe a year. The queue started when the Board began recruiting for the Little Rock Nine. They kept building the queue of students who would fill the slots for the other grades. Out of the Little Rock Nine, there were only two that went back to Central in ’58.

Children living in the segregated south were taught what to do so that you could be safe. All the things that our parents taught us and the things that we learned at church and Girl Scouts about how you live safely in an environment that has all these barriers and restrictions, prepared us to go to Central.

The First Day At Central

I got up that morning. Daddy stayed home from work and we prayed. Because I lived closest to the school, I was the last to be picked up. Reverend Henderson drove the three students to school; so Sondra, Frank and I were all together. When we arrived, we saw national guardsmen on the steps. It was not clear what was going to happen when people learned that three more Negro students were going to enter. What you saw that happened to the Little Rock Nine was very active – it was in the news; people were doing all kinds of things to harass the Little Rock Nine. That's why the troops came. That's why they had escorts in the hallway. The five of us didn't need that, because the resistance turned to shunning.

As we walked up the steps, we noticed that everybody was in class and it was really quiet. We met with Miss Huckabee, our key contact. She let us know where her office was and that she was available in case we had any distress or needs. Then she took us each to our homerooms.

What I think people can't begin to understand is how abusive isolation is. What I learned that first day was that we were going to be shunned. Nobody in my homeroom ever spoke to me in the three years that I attended Central.

Every day when I went past this classroom door, there was this kid that would lean out and glare at me. Finally, one day he leaned out and spat in my face. The most frightening thing that I recall was when a football player kicked me on my knee. I realized that I was in a place that there was not one person who would come to my aid. That's the most jarring thing that one can learn is that you are truly alone in the situation and that other people don't sense your humanity. I was at the top of a staircase and had to go down five flights of steps, knowing that nobody would reach out if I stumbled or fell.

But whatever the students had learned from their parents, it wasn't about hating me. I've never felt that I was hated. I felt that people have been taught that I didn't matter, which is different.

There was never a day in which I felt that quitting was what I wanted to do, but there were things I did have to give up. I never walked any place again. It was dangerous. I was taken to school every day. I was picked up. I didn’t learn to drive until I was 30, because my parents didn't ever want me to be out alone. I never did anything alone. I never went on the bus again alone. Everything that I did, I was always with my parents, or my brother. Being clearly identifiable because of the school situation, put me in a dangerous position. You're like a marked person. You're a target. 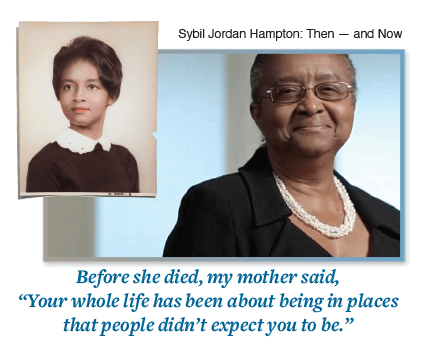 African American students could not attend any activities at Central or participate in any student organizations by law. So, I attended dances and went to basketball games at Horace Mann High School. I was in Girl Scouts. I was in Y teens. I did things at church. It was two separate lives: one educational and one social.

After coming out of Central, I had promised myself that I would never do anything that would put me in direct connection with any young people again in life. I got a really great scholarship and an internship with the Public Health Service. I thought I'd like to get a Master’s in public health.

Thirty years later, I became the President of the Winthrop Rockefeller Foundation. I would never have told you that I would have come back to Little Rock to do anything more than to take care of my parents. I would never have believed that the best job that I could ever have would be in Arkansas. It was fate. It was quite ironic, and it helped me to know that yeah, you can go home again. It was healing and it was very challenging.

In the beginning, as the President of the Foundation, I would show up for a meeting and people would try to direct me someplace else. In some meetings, I might be the only woman who was there. Once again, I was having to make my way, build relationships and trust, and become a part of the flow. I didn't know anything about private foundations when I grew up in Little Rock and I became the president of one.

So, when young people say to me, “Oh, my goodness, things have not changed.” I reply, “That's not true. We didn't get all the way. It's a million-mile journey. It is going to be difficult, but we are not in slavery.” You're not going to a destination; it is a journey of a million miles. Live with hope and joy in expectation that the future is going to be a future in which you embrace the promises that your foremothers and forefathers in slavery never realized. As democratic citizens, you might be able to be the first generation to realize that dream.