or a number of years my male cousins and I have gotten together once every three months or so for dinner and lots of storytelling. We never run out of stories to tell, in part because we’ve all lived full lives and in part because 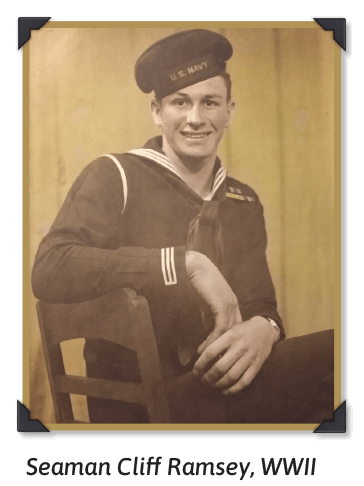 we are still living full lives. That being said, it’s nice to have someone new in the group from time to time.

A while back, my Uncle Cliff Ramsey joined us. Uncle Cliff served in the Navy during World War II. Most of those folks don’t talk much about that time in their life and Uncle Cliff was the same. So, I’m not sure what subject came up to start him down this line of conversation, but we all sat there astonished as he rattled off this story as casually as if he was telling us how to change out the carburetor in a ‘57 Chevy.

During WWII, Uncle Cliff served on the USS Shaw. The Captain knew Uncle Cliff was a country boy, from White County, Arkansas, and asked if he would be the lookout up in the crow’s nest. Uncle Cliff, accustomed to the glare of morning sun from time spent hunting in the woods, gladly agreed. According to Uncle Cliff, the enemy ‘zeros’ (that’s Navy slang for Japanese fighter jets) liked to approach with the sun behind them, making them harder to spot. None of us were aware he played such a vital role on the ship.

He told about times he’d spot a fighter jet coming in and alert the ship in time for everyone to take cover and fire back. However, there was this one time, he said, “I missed one coming in. The plane got within shooting range undetected and came in guns blazing.” The Captain happened to be in the crow’s nest with him. As the bullets landed around them and pinged off the ship’s hull, they dove into the doorway and tumbled part of the way down the steps.

My cousins and I sat there awestruck. There were other questions to be asked, but we were silenced with the honor of hearing the firsthand story of a hero. We realized heroes come in all sizes, shapes, colors and even relations. My Uncle Cliff Ramsey, the lookout for the USS Shaw, thank you for your service and rest in peace.