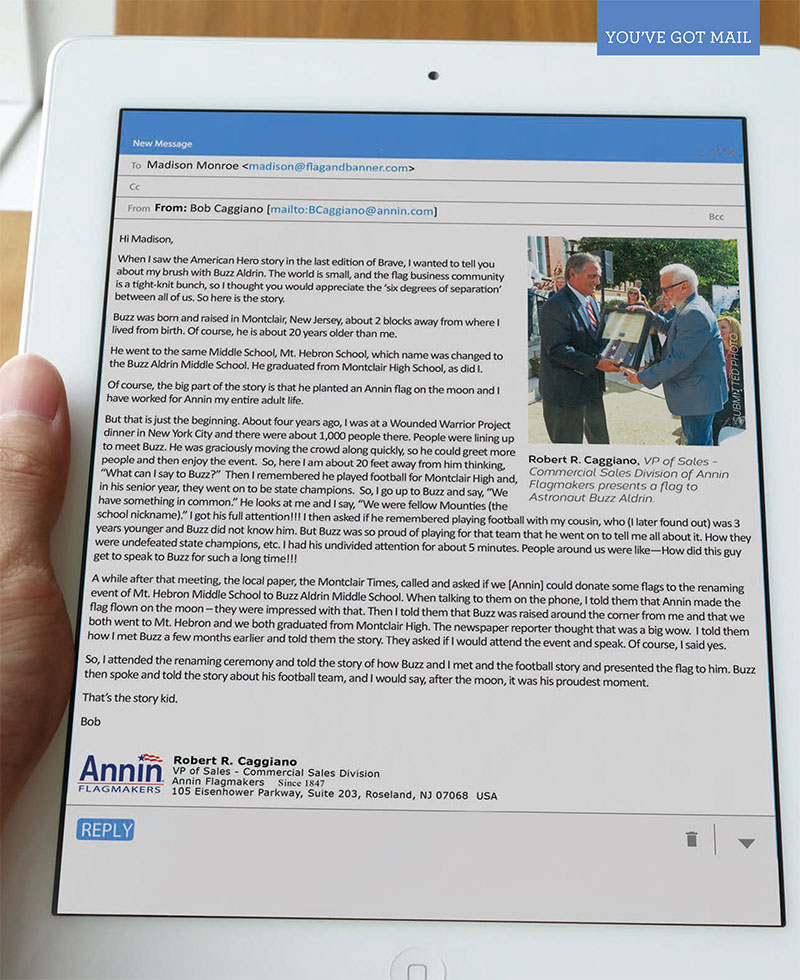 Text of the letter from Bob Caggiano:

i Madison,
When I saw the American Hero story in the last edition of Brave, I wanted to tell you about my brush with Buzz Aldrin. The world is small, and the flag business community is a tight-knit bunch, so I thought you would appreciate the ‘six degrees of separation’ between all of us. So here is the story.

Buzz was born and raised in Montclair, New Jersey, about 2 blocks away from where I lived from birth. Of course, he is about 20 years older than me.

He went to the same Middle School, Mt. Hebron School, which name was changed to the Buzz Aldrin Middle School. He graduated from Montclair High School as did I.

Of course, the big part of the story is that he planted an Annin flag on the moon and I have worked for Annin my entire adult life.

But that is just the beginning. About four years ago, I was at a Wounded Warrior Project dinner in New York City and there were about 1,000 people there. People were lining up to meet Buzz. He was gracious in moving the crowd along quickly, so he could greet more people and then enjoy the event.  So, here I am about 20 feet away from him thinking, “What can I say to Buzz?”  Then I remembered he played football for Montclair High and, in his senior year, they went on to be state champions.  So, I go up to Buzz and say, “We have something in common.” He looks at me and I say, “We were fellow Mounties (the school nickname).” I got his full attention!!! I then asked if he remembered playing football with my cousin, who (I later found out) was 3 years younger and Buzz did not know him. But Buzz was so proud of playing for that team that he went on to tell me all about it. How they were undefeated state champions, etc. I had his undivided attention for about 5 minutes. People around us were like—How did this guy get to speak to Buzz for such a long time!!!

A while after that meeting, the local paper, the Montclair Times, called and asked if we [Annin] could donate some flags to the renaming event of Mt. Hebron Middle School to Buzz Aldrin Middle School. When talking to them on the phone, I told them that Annin made the flag flown on the moon – they were impressed with that. Then I told them that Buzz was raised around the corner from me and that we both went to Mt. Hebron and we both graduated from Montclair High. The newspaper reporter thought that was a big wow.  I told them how I met Buzz a few months earlier and told them the story. They asked if I would attend the event and speak. Of course, I said yes.

So, I attended the renaming ceremony and told the story of how Buzz and I met and the football story and presented the flag to him. Buzz then spoke and told the story about his football team, and I would say, after the moon, it was his proudest moment.