In its heyday, the British Empire brought many regions under its sway. Although the sun has set on the Empire, fourteen territories still have constitutional ties to the United Kingdom, referred to as the British Overseas Territories (BOTs).

BOT flags feature the regional emblem on the right side with the Union Jack in the top left. 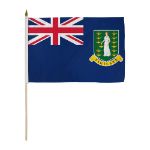