National Hispanic Heritage Month begins on September 15, the anniversary of independence for five Latin American countries—Costa Rica, El Salvador, Guatemala, Honduras, and Nicaragua. In addition, Mexico declared its independence on September 16, and Chile on September 18. The term Hispanic, as defined by the U.S. Census Bureau, refers to Spanish-speaking people in the United States of any race. On the 2000 Census form, people of Spanish/Hispanic/Latino origin could identify themselves as Mexican, Puerto Rican, Cuban, or "other Spanish/Hispanic/Latino." More than 35 million people identified themselves as Hispanic or Latino on the 2000 Census. Show your pride with Flagandbanner.com products and flags of Hispanic Heritage.
Showing 1 - 24 of 106 results 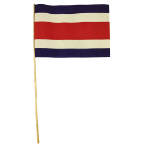 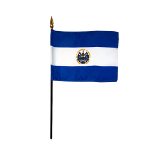