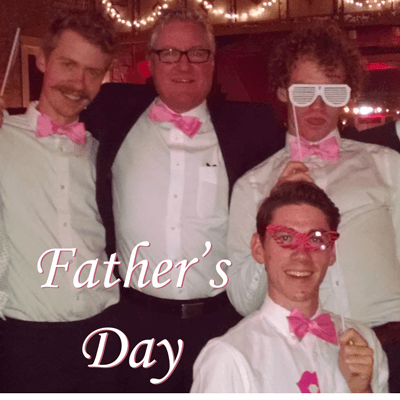 Father's Day was first celebrated on June 19, 1910 by Sonora Smart Dodd (a native Arkansan!). After the success of Mother's Day, Miss Dodd thought that fathers should have a similar holiday honoring them. It was not a as successful to catch on as Mother's Day had. In 1966 President Lyndon B. Johnson made the 1st presidential proclamation to honor fathers with Father's Day to be on the 3rd Sunday in June. President Richard Nixon made it a national holiday in 1972.

Father's Day is meant to honor fathers and fatherhood, the paternal bonds, and the influence of fathers in society. A father doesn't have to be biological - it can be an adoptive parent, an uncle, and even a grandfather. Give your father a special, one of a kind father's day gift this year.

Our featured photo is Vice President and Lead Salesman Grady McCoy with his sons Gray (Grady), Matthew and Jack at the 2015 Dancing Into Dreamland fundraiser.