Kansas was admitted into the Union on January 29, 1861 making it the 34th state in the United States of America. Kansas took its name from the Kansas River, which was named for the Kansa Native American Tribe. Diverse and numerous Native American tribes used to call the land their home. Kansas has a violent and tumultuous history. In 1854, the U.S. government opened the area to settlement. This brought in abolitionists and pro-slavery settlers to determine if the territory would become a free state or a slave state. The violence between the two groups gave it the nickname Bleeding Kansas. The abolitionists won over and the new state became a free state upon admittance.

Today, Kansas is one of our most agriculturally productive states. They produce a high quantity of sunflowers, wheat, and sorghum. Their state flag depicts the Seal of Kansas and a large sunflower. Their official nickname is The Sunflower State. Looking for a Kansas gift? We carry a wide selection of Kansas State University and University of Kansas flags and banners. 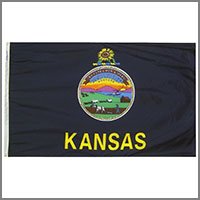 To learn more about the sunflower state visit the Kansas Historical Society Website.