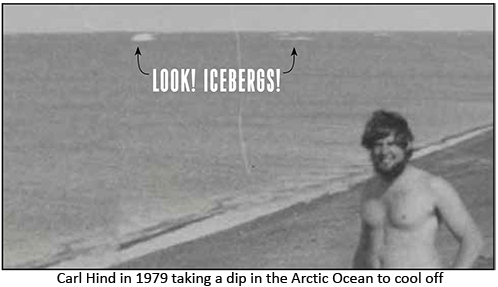 The story of the "Skinny Dipper" flag

n 1954, a couple and their three daughters, who were members of the Willamettans Family Nudist Resort in Oregon, moved to Anchorage, Alaska and met others who enjoyed social nudity. Yes, in Alaska! Summers are short, the bugs plentiful, but long winters bring many opportunities for saunas, hot tubs, potluck dinners, game nights, and family-friendly socials. The first nudist group in Alaska was dubbed the Auroratans. The group found that, in the summer-boats and gravel bars on rivers had enough breeze to keep away the mosquitoes, and the long hours of sunshine made the gray stones plenty warm for sunbathing and even getting those tanning hot enough to brave a dip in the glacial river to cool off.

When the Auroratans faded out, a couple of new groups formed: Alaska Free Beaches, promoting use of public lands, and the Midnight Sun Club, promoting home-based activities like back-yard BBQs in the summer. Other groups have come and gone as key leaders have died or moved from Alaska. There were the Polar Bares in Fairbanks, a group in Juneau, and another in Homer. The problem, before the internet, was knowing whom we are and how to link up when there was such a changing set of names and organizations because Alaska is so big. We needed a way to identify each other. The idea of a flag was discussed in the 1980s. It could be placed on a car, camper, boat, backpack, house, fenced yard, or even put on a stick when using a bit of beach or a clearing or sunning.

Over the years the little group in Alaska proposed such an ensign to the large national nudist and naturist organizations, but what resulted were flags with words and logos. What was desired was something like the diver’s flag that signals boaters that scuba divers are near-by and to proceed cautiously. In our case, it would indicate family-oriented skinny-dipping was taking place and warn those who might be offended.

Research was done on the colors and shapes of the international maritime signal flags. It was suggested we just use the existing “N” signal flag (for nude), but when that flag is used by itself, it means “negative” or “no,” which is opposite to our positive message. What was desired was something that fit the nautical system, but was new. The design needed to be easy to see from a distance. Our design was selected by combining the shape of the capital letter "N" with yellow, for the sun and warmth above, and blue, for the sky or water below.

We searched for companies that make durable and custom-made ensigns and found FlagandBanner.com. After some exchanges, it was clear working together would be easy. Some of the first names considered for the flag were the “Body Positive” flag and the “Nude Haven” flag. It was only when “Skinny-dipping” was mentioned that we actually began to communicate what the ensign’s job was going to be.

When the first batches of flags (30 sewn and 300 printed) were delivered, they were immediately distributed to the current Alaskans who use social media to organize activities. Then batches of flags were sent off to the two national organizations with a story of how the ensign had been developed and used.

Bundles of ensigns were also sent to other national organizations in Australia, Britain, Canada, New Zealand, and to the International Naturist Federation in Austria. A large number will be taken and distributed to the cabins on the Bare Necessities "Three Seas" Cruise around Italy in June, where it is hoped the Captain of the Royal Clipper will fly the new ensign when clothing is not required on-board. The long-term objective is that those who enjoy family-friendly nude recreation will- be able to identify each other over distance, no matter their language or nationality. We now have an ensign to help communicate our brave message: skinny-dipping is fun, so join us! 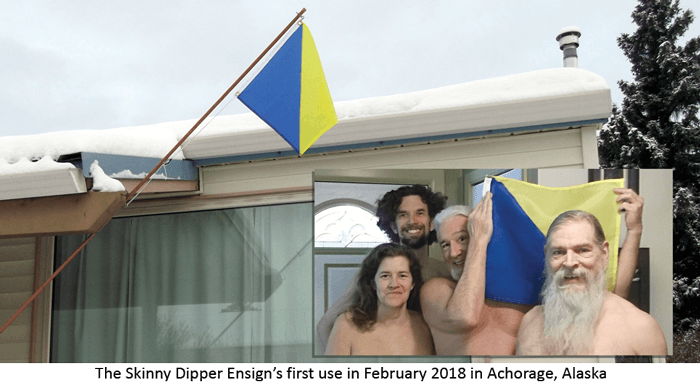