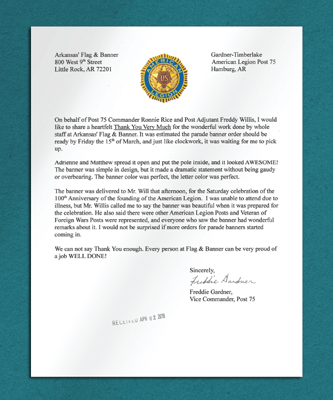 On behalf of Post 75 Commander Ronnie Rice and Post Adjutant Freddy Willis, I would like to share a heartfelt Thank You Very Much for the wonderful work done by whole staff at Arkansas' Flag & Banner. It was estimated the parade banner order should be ready by Friday the 15th of March, and just like clockwork, it was waiting for me to pick up.

The banner was delivered to Mr. Willis that afternoon, for the Saturday celebration of the 100th Anniversary of the founding of the American Legion. I was unable to attend due to illness, but Mr. Willis called me to say the banner was beautiful when it was prepared for the celebration. He also said there were other American Legion Posts and Veteran of Foreign Wars Posts were represented, and everyone who saw the banner had wonderful remarks about it. I would not be surprised if more orders for parade banners started coming in.

We can not say Thank You enough. Every person at Flag & Banner can be very proud of a job WELL DONE!