Growth in business produced a growth in product lines. What started as a single product-line inventory- the classic red, white and blue U.S. flag- grew to include customized flags and banners, commercial flagpoles and soft signage. After the 9/11 terrorist attacks, the gift shop opened to the public to fill the niche for local customers who wanted to browse for unique products to express their patriotism. In fact, FlagandBanner.com boasts the largest selection of patriotic products offered online. Currently, shoppers can find a range of products for home and garden, patriotic decorations, jewelry, clothing, toys, dishes and more, which is why the company slogan has become “We’re so much more than a flag store.” FlagandBanner.com attempts to buy products Made in America when possible and prominently notes them both online and in the store. Learn more about FlagandBanner.com in our Press Center.

FlagandBanner.com’s headquarters has been on the Historic National Register since 1991. Taborian Hall, a three-story, red brick building located at 800 West Ninth Street in downtown Little Rock, Arkansas was built in 1916. In the 1900’s, the Dreamland Ballroom, located on the third floor of Taborian Hall, played a key part in the history and development of the African American community in Little Rock, hosting legendary musicians such as Duke Ellington, Ella Fitzgerald, Etta James, BB King, Cab Calloway, Louis Jordan, Redd Fox and many more. Currently, a historic preservation project is underway to restore the Dreamland Ballroom, on the third floor of the Taborian Hall. PBS affiliate AETN, recognizing the significance of Dreamland, made a documentary and local college, University of Arkansas at Little Rock, has helped publish a book, which is now available online. In 2018 and again in 2020, the National Park Service awarded Friends of Dreamland Ballroom a half-million dollar African American Civil Rights Grant to build an elevator reaching the third floor, making the Ballroom ADA compliant.

In 2020, McCoy acquired Ourcornermarket.com, a sister site specializing in home and lawn décor. Visitors to the online emporium will find a wide array of address plaques, memorial benches, and signs. In 2021, McCoy acquired Freedom Flags in North Miami, Fl. McCoy kept the location and opened her first secondary location for FlagandBanner.com.

About Kerry McCoy, the founder and president of FlagandBanner.com: 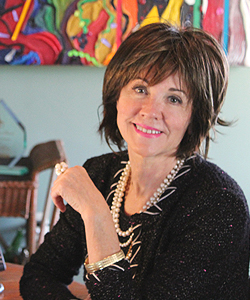 Kerry McCoy has brought her 40+ year old company firmly into the 21st century with nationwide advertising, distribution and technology. McCoy lives the American dream in more ways than one. Her story demonstrates how hard work, intelligence, intuition and a little luck can pay off big in America.

McCoy began her business in the midst of the 1974-1975 recession. As a recent fashion merchandising school graduate, McCoy was unable to find work so she decided to start a small business with $400 in savings and self-designed business cards. What began as door-to-door distribution in 1975 quickly changed to a telemarketing sales strategy due to rising gas prices. After becoming a new mother, McCoy reinvented her company again to a mail-order and catalog business. McCoy’s husband, Grady McCoy, has been with the company since 1990. Though the McCoys have raised four children together, Kerry calls FlagandBanner.com her “first born.” After learning about the internet in 1995, McCoy adopted a “dot com” business model. Her business is now known worldwide as FlagandBanner.com, with over 30% of her current sales coming from e-commerce.

McCoy is not only a wife, mother and owner of a thriving business, but is also active in the community and spends countless hours working with the non-profit Friends of Dreamland to restore the third floor of Taborian Hall. Always the entrepreneur, McCoy began publishing an in-house magazine recounting stories that customers relayed to the FlagandBanner.com sales team. Brave Magazine is distributed nationwide, free to FlagandBanner.com customers.

In 2016, McCoy began broadcasting her radio show, “Up in Your Business with Kerry McCoy.” In the show, McCoy interviews prominent people, focusing on their journey through life toward success.

During the past four decades, under McCoy’s direction, FlagandBanner.com grew from a sole proprietor to a multi-million-dollar distributor, retailer, manufacturer, and internet retailer with a multimedia presence. The product of this explosive expansion resulted in a slight identity crisis. The businesses were connected but not joined. In 2017, Kerry rebranded all of the different endeavors under the umbrella of Kerry McCoy Enterprises, adding OurCornerMarket.com to the family in 2020.

Learn more about Kerry McCoy on her Blog.

Some of Our Customers

These may be "big" customers but we treat all our customers the same. Big or small, for personal use or for business, we treat everyone with the best possible customer service that we can. That is why you will get a real person when you call us toll free at 1.800.445.0653 SIX DAYS A WEEK. Yes, we are available on Saturday from 10am to 4pm central time. No other flag and banner company can say that!